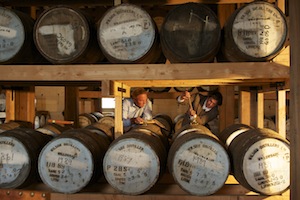 Oamaru, New Zealand– April, 2013 – It’s early in 2013 but already New Zealand Whisky is gaining accolades and market share on opposite sides of the world. Battling it out with over 300 whiskies at the World Whiskies Awards in London, the Dunedin-made whisky won across three categories, but its greatest recognition was at the San Francisco World Spirits Competition.

“Winning one of the few DoubleGold medals on offer saw our South Island Single Malt recognized as one of the world’s great whiskies. We are humbled by our results in such high caliber competitions; it really honors the craftsmanship of the Dunedin distillers, and the commitment to quality by our Oamaru team, and our production partners in Christchurch,” says company CEO Greg Ramsay.

With over 1,400 spirits in San Francisco this was the largest competition in their 13-year history. “Its one of the most respected beverage competitions in the world, with over 34 judges doing blind tastings. We were recommended to enter this particular competition by ex-patriot Scot Michael Fraser-Milne of WhiskyGalore in Christchurch- so we can thank him for this inspiration.”

“This is an enormous result considering our first shipment has just arrived in the USA for the Mid-West market out of Chicago. We’ve now had enquiries from Californian and New York distributors too,” explained International General Manager Troy Trewin.

“It really sunk in just how significant the DoubleGold was, when I saw which other distilleries were awarded, and the great whiskies which only gained Gold or Silver behind us,” says Trewin. “There was the South Island Single Malt, awarded DoubleGold alongside Talisker, Glenmorangie and Bushmills Single Malts, and ahead of the likes of some of Scotland’s favourites like Aberlour and Dalwhinnie.”

The South Island Single Malt will now go on the event’s DoubleGold 14 city roadshow, showcased to buyers, whisky writers and connossieurs from across the beverage industry around the US.”

The New Zealand Whisky Company is a success story that signals a revival of the whisky industry in New Zealand. The whisky was once distilled by Seagram’s in Dunedin before the distillery was sold to Fosters in 1997 as part of a global rationalisation. Fosters mothballed the distillery and inexplicably closed it. But fortunately, more than 400 barrels of this whisky remained, and were bought by the New Zealand Whisky Company, set aside to mature and sweeten. Since then, the company has worked hard to revive the century-old industry and the whisky has been met with wide acclaim.

In London, the New Zealand Whisky Collection’s DoubleWood won the category for Best Australasian Blend, while the South Island Single Malt was voted the best aged Single Malt from Downunder.

This event was closely followed by the success at the San Francisco World Spirits Competition in late March where the DoubleWood also gained a gong, picking up a Silver Medal to complement the Double Gold for the South Island Single Malt.

“The DoubleWood is turning heads everywhere it goes; it was my husband Warren’s idea to take the ageing Wilsons blend and give it a new lease on life in red-wine barrels. This gives it a depth of character, a lingering toffee sweetness, and rich ruby colour, by finishing its maturation in the French oak barrels from Mills Reef winery in Taurange,” continued Oamaru manager Debbie Preston. “While the Single Malt got the gong as one of the world’s great whiskies, I expect it’s the DoubleWood that had everyone talking. Recreating the magic of these whiskies, will be one of the great challenges in our new distillery.”

As well as regaining the foothold once held across New Zealand by Wilsons, the whisky is now exported from Oamaru and available across Canada, the UK, Australia and Europe.